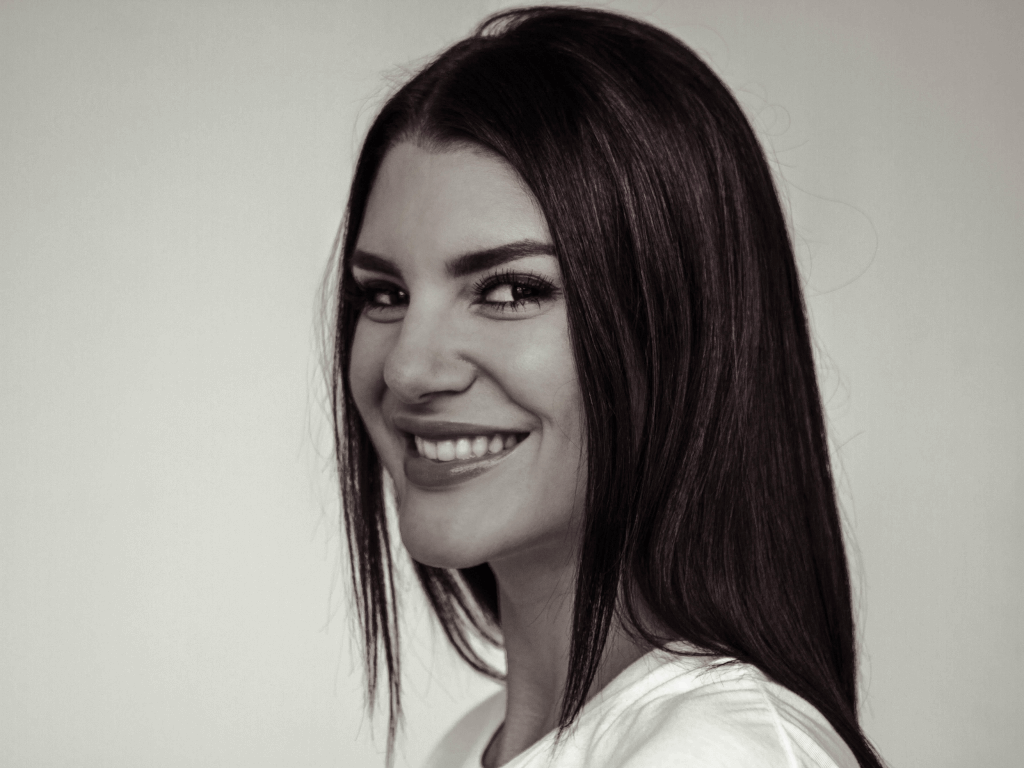 This began as a story about who I am, but as I continued to write it, it turned into a story of who I’ve become, and how I got here. It may be a little surprising, it’s certainly a little dark, and every word is real. If you’ve ever struggled with issues of self-worth, you may find my story compelling. Either way, I hope you enjoy it.

It all started in November of 1987: Fatal Attraction was slaying the box office, Walk Like an Egyptian was the hit song of the year, and Renee Egan was born. I grew up in a basement apartment in New York, about an hour and a half outside the city on Long Island, in a town called East Northport. My sister from my mother’s previous marriage is 14 years older than I am. We shared a room until I was four, which is when she went away to college. When she left, I made up an imaginary brother named Frankie. I think it was my way of coping with her being gone.

My parents had and still have a unique dynamic. My mom was a waitress who worked for the mob and decided to go back to school at 50. My dad was a repo man. They separated when I was in grade school, but my father was still over every night for dinner. I guess you could say my parents stayed friends, but as I’ve gotten older, I’ve learned that it was less of a friendship and more of a boundaries issue on my mother’s part. Regardless, it felt nice to have my dad around, so I thank my mother for her role in that, healthy or not.

As a kid, I was a bit of an outsider. I loved Barbies, but I also had a lizard named Nacho and practiced “witchcraft” — which is a euphemism for my creepy Ouija board and candles combined with pathological lying phase. I wasn’t popular, and I didn’t have many friends. I always loved writing and creating as a child, and I still do. I think it stems from the fact that I was continually looking for an escape from reality.

In fifth grade, things got kind of bad. I was bullied so horribly that I started skipping school and running away to the woods up the hill from our house. I’d bring my matching blanket and pillow — white with rainbow stars — and wander the woods all day, pretending I was exploring a foreign land. My truancy was so severe that social services came and threatened to take me away. The principal used to give me candy when I’d come to school. I switched school districts after that year, and the remainder of my grammar school days were pretty normal-ish.

My freshman year of high school, my mom and I moved to Arizona. We like to pretend it was my idea, but I know deep down that it was my mom’s way of getting me away from my father’s influence. I love him, and he’s my daddy, but he sees the world with such cynicism that he’s hard to be around sometimes.

High school was pretty cookie-cutter for me. I was in show choir, breezed through my AP classes with ease, and had friends from all walks of life in school. For my 16th birthday, my dad bought me a cherry red 1990 Firebird Trans Am. I crashed it within a week, which got me a fresh paint job, so my cool car was the talk of all my friends. I wouldn’t call myself popular, but high school was easy.

College saw some speed bumps. Straight A Renee found alcohol, sex, and drugs: all things that were brand new. I did my best for one semester, then decided to change my major to a BA in cocaine. I quit the hard stuff, but in the interim, I’d also sort of quit school. Since I suddenly had all this free time, I started writing Jonas Brothers fan fiction under a pen name. It actually popped off, and I had tens of thousands of readers and followers. Though I’d dropped out of college and utterly disappointed my parents, having that feeling of acceptance and of something I created being adored by so many people was one of the happiest times of my life. Once I finished out my lease in Tucson, both mom and I decided it was time to come home to Scottsdale, which is where I started working in nightlife.

For most of my 20s, I bartended and did bottle service, and I was goddamn good at it. Sell an overpriced bottle of champagne to a privileged rich male by wearing a pushup bra? Sign me the fuck up! I worked the nightclubs in Scottsdale, and like everyone worth knowing in Scottsdale in the late 2000s, I got a DUI. That was the moment I decided to move to Vegas.

So I packed up my life, and with a fancy breathalyzer in my car, I moved to Vegas and made the jump into the big leagues of hospitality. It was intimidating, terrifying, disheartening, and fucking hard. It’s also a time in my life where I had endless fun, made stupid money, and acquired lifelong friends. Above all, it was a learning experience: learning about the life that I wanted, but more so about the life that I didn’t. That’s when I decided to make the move to California.

As a creative, I always knew I wanted to live here. Throughout my life, I went through all of your typical “I wanna be a star” phases — I’ll be an actress, I’ll be a singer, I’ll start a band, I’ll be a writer. The one thing that was constant and that always stuck was Los Angeles as the location of my dreams.

So, I did it. I upped and moved to Los Angeles with no plan and absolutely no idea what I was doing. I spent the first five months here on a leaky blowup mattress in the living room of an apartment built in the ’50s, with no central air conditioning, in the middle of summer. I remember I used to sit in front of the tiny wall unit, which was likely older than I am, air full blast while I did my makeup so I wouldn’t immediately sweat it off. I continued bottle service in LA for a while, but as much as I loved working in hospitality, I knew there was a timer on it. The older I got, the shorter my fuse grew.

One fateful day, a best friend of mine mentioned an opening as an assistant where she worked. She was a casting producer for unscripted (reality) television. I wasn’t sure what that meant, but my wheels were spinning anyway, so I said, “fuck it” and went for an interview.

The thing they don’t tell you about working in television is that it’s all about who you know. Graduated Harvard top of your class and have a full resume of internships? No one cares, probably. Your cousin’s husband runs Disney? You have a job. Herein lies the perfect example: I was a college dropout bottle service girl with absolutely no experience in casting. I was instantly hired.

You know that pesky little saying about Hollywood: “fake it ’til you make it?” I can attest to that. It’s 100% true. After working as a casting assistant, I was promoted internally to associate. However, going from an associate to a producer level is not such an easy leap. You have to have producer credits to get a producer gig, but you can never get those credits without being given a chance, which you won’t be given without the experience. A hell of a catch-22. So, how do you navigate this? You fake it, i.e. you slightly tweak your resume.

Most television jobs are freelance, which means you hop from gig to gig, show to show, working for different companies every time. When I wrapped as a casting associate, the only jobs I could get were associate gigs until I told a little white lie in my cover letter — I said I’d interviewed talent before. Had I ever interviewed talent? No fucking chance! But I’d watched other producers do it. So, I faked it. Was I intimidated and confused as all hell when I got hired for the first time as a casting producer? Hell yes. But it was worth it. And I learned. I faked the crap out of the start of my career until eventually, with time, I learned how to be amazing at my job.

If it’s not obvious by the aforementioned story, I’ll spell it out here: working in the entertainment industry is hard. It’s cutthroat. It’s cliquey. It’s not for everyone. You don’t get ahead without pushing yourself there. I never would’ve gotten where I am today if I hadn’t taken a massive leap of faith in myself.

So, remember all that crap about my childhood and the dysfunctional family dynamic and the bullying? Here’s where it comes into play. Due to how I was programmed as a kid, I’ve spent my entire life trying to convince myself that I’m good enough. I’ve always struggled with self-esteem and self-worth. I had to learn how to trust in my abilities and how to take chances in order to progress, not only in my career, but in my life. I had to take a zero-fucks-given attitude and jump headfirst into shark-infested waters to achieve anything worth writing about today.

So, precisely what sappy message am I getting to here? BELIEVE IN YOURSELF. Read that again. (I warned you it was sappy!) To this day, I struggle with the same demons I’ve dealt with since childhood. Therapy helps, but that’s another story. The most important takeaway, at least for me, is that you are not the person your inner childhood self thinks you are. You’re far more capable than that little voice in your head wants you to believe. You’re worthy of self-love. You can accomplish anything if you just get out of your own way. It sounds cliché, but it’s the God’s honest truth.

So, what’s it like living in sunny Los Angeles? Today, I’m the full time Casting Director at a wonderful production company called Painless Productions. I’ve been there for almost three years. In my spare time, I’m still writing, admittedly with less Jonas Brothers involvement. I spend more hours a week in traffic than I’d like. I rarely see celebrities; though I did run into Matt Damon in a baseball cap getting tacos once and it was like the second coming of Jesus. I wish I could tell you the one secret you need to know to make it in Hollywood, or to make it anywhere you want, but if I’m being honest, I don’t think it works that way.

I think your own success and value lies in learning how to respect and love yourself, and to take that leap, no matter how scary it may seem. I promise… it’ll be worth it.