What Side Are You On? 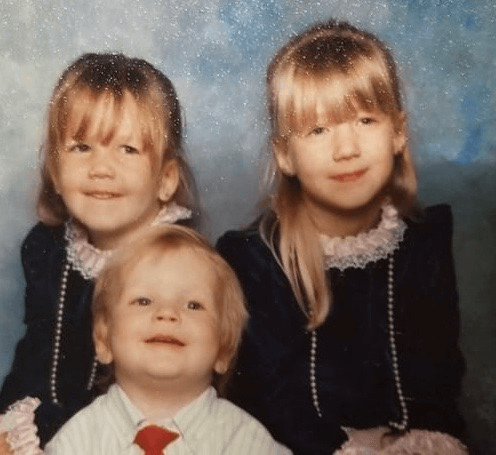 Ten days until Christmas! Saying ‘time goes by so fast’ feels like something I would’ve rolled my eyes at when I was twelve, but damn, is it true. I feel like I just got my braces off after four grueling years of not being able to bite into an apple. And these last few months of pumping out stories and collaborating with people have truly been the most rewarding.

As you know, we’re wrapping up Nature v. Nurture week with stories from two different families. I don’t want it to be in the exact format we did on Wednesday, because we only want the same thing when it comes to our laundry cycle (no shrinkage, please), and our order at Chick Fil A.

So, we’ll start by introducing you all to our writers: one of my closest friends, Sara Ward, and her younger brother Austin, as well as my three cousins! Ashley, Michelle, and Danny. I know the “I feel so honored” phrase can come across a bit lazy, so I’ll say the privilege I experience in connecting with everyone is the best birthday present I could receive.

Alright – let’s dive into everyone’s first memory, shall we? Sara shares her recollection of watching Coneheads before bed, shortly after being woken up by her dad as her mom’s water broke – they would head to the hospital and Sara would soon meet her baby brother!

It was difficult for Austin to identify a single memory, as he states most were mundane, from kindergarten or first grade. *Shame he didn’t remember that amazing sweater*

Ashley’s first memory was from her 4th birthday party – she was crying because there was no candy in sight; she was sure everyone hated her, so she secluded herself until her babysitter came to comfort her with… candy!

Michelle expresses something similar to Austin, in that it’s hard to identify a specific memory; she suffers from PTSD so remembering the past doesn’t come easy.

Danny remembers living off Silverado Trail, playing in a rainy field with their dog, Snoopy. The mudslide was particularly memorable.

Now, let’s look at everyone’s thoughts on their parents – Both Sara and Austin describe their mom as supportive, caring, and loving – the protector of the family. Their father on the other hand… Sara recalls he was happy at one point – hardworking, even, however, once alcohol consumed him, or vice versa, his behavior became toxic. His verbal and emotional abuse turned physical.

Ashley, Michelle, and Danny all describe their mom as a social, stay-at-home mother. One believes she tended to overshare their personal stories with her friends; another would become resentful at times, and stopped writing in her diary out of fear mom would snoop through it again. That said, they all shared the same sentiment – that she meant well, and her overbearing ways were most likely a result of how she was raised. I got a kick out of how they answered the question about their dad, because it’s very similar to how me and my brother answered… which makes sense, given that they grew up together. *nurture* Dad was described as strict, closed off, and hardworking; one of them was adamant he was there for most events – swim competitions, water polo games, track meets, band competitions… going as far as to say, once you got to know him, you would liken him to that of a teddy bear.

We will touch briefly on their childhood homes because I did find some of their takeaways interesting – Both of the boys give little detail – one even saying, “I don’t really remember.” All of the girls recall the posters they had on their walls; some had Freddie Prince Jr. or NSYNC, with another plastering metal band photos up. My cousins tell me they moved often, so some of the memories blur, but oddly, the girls both mention removing the closet doors from the room they shared, to create more space. Michelle and Ashley – neither of you loved sharing a room with the other growing up – don’t feel bad- we all just want our space to write in our journal or talk on the phone with our crush… though, Michelle could actually talk to her boyfriend via cups with a string through the bottoms since her boyfriend lived right across the street. She doesn’t tell me this took place, but I like imagining it.

I ask them all to describe themselves as a child and tell me how they’ve changed overtime. Interestingly, at least to me – four out of five said they were introverted at some point, some even more so now. Both of the boys self-diagnosed as currently more anti-social than the norm. There was a common theme about trying to fit in as a young girl, feeling insecure, sensitive, or too emotional, which has evolved into a confidence in being assertive – stating their needs. You go, girls!

As could be expected with three siblings, there were times when two of them would team up against the other… this happens in friendships all the time as well. Stay in groups of two, people! Sara and Austin internalized their father’s behavior differently and didn’t connect the way one could’ve hoped – who’s to say if their ability to bond would’ve been there if they’d had a loving father in their life… and so the male narrative continues.

Some answers on what they all got in trouble for most… you can guess who’s who – Hiding away and reading (wow – you precious little thing), classroom disruptions, slashing my dad’s tires, throwing a party, and talking back.

Tell me what you did outside of school… My California cousins (well, two of them) could be found at the beach with friends, swimming and surfing (I’M SO JEALOUS). They all partook in some sort of sporty activity… and Ashley loved to read (you can guess who got in trouble for being tucked away, enthralled with a book). Sara, like me, was on the dance team + still competing with her studio; understandably, she avoided home like the plague. Austin! Hi! You fit right in with the Gen Z’ers – working on electronics and playing video games… you working in Silicon Valley now?

I asked Sara and Austin a question about their father – specifically, their memory of him leaving – here’s what they had to say:

Austin: Nearly every night was filled with screaming, throwing, holes in walls, and other outbursts. It became so routine the effect quickly wore off. I noticed his anger was mostly targeted towards women. I was in 8th grade when he left, and I would no longer have to live with his aggressive behavior.

Sara: My parents were separated when I was a Junior in high school. Despite being at an age where my memory should be intact, his departure was so painful, a lot of the details are fuzzy. I remember the verbal and physical abuse my mom and I endured became so unbearable we left the house and stayed with a family friend for most of the summer before my senior year. For some reason, we came back home; I’m sure another sorry plea and sob story about how he’d change… well, he didn’t change, and my brother had enough – he came after him with a baseball bat. Divorce went through, a restraining order was filed, and my dad moved away. My mom and I became much closer once all of that was behind us.

Let’s close with how everyone’s childhood has shaped who they are today:

Michelle: My childhood traumas, which I know I didn’t get into, but perhaps another time really shaped who I am today. I am hyper aware of my surroundings and extremely careful around men. I’m very protective of those around me, especially (obviously) my children. I discovered the career path I wanted to take (I’m an RN) after thinking I would be a zoologist or marine biologist; I couldn’t be happier.

Sara: My childhood molded me into an anxious, emotional person, with some feelings of depression every now and then. I feel so much and really make people prove I should trust them. As I have gotten older, however, I’ve made a real effort to focus my energy on building more successful relationships, realizing I’m the only one in control of my reality.

Ashley: My childhood helped me understand moody teenagers in such a real way, which has been invaluable with the work I do today (she’s a PhD, y’all). I’m also extremely proud of myself for following the path I intended, rather than letting anyone else dictate what I should be doing or how I should be living. I think that’s something I was born with. Team Nature???

Austin: I would make the argument that everyones’ childhood has shaped the way they are today. You aren’t just reset after “childhood” into a state where past experiences don’t matter. Recalling and acting upon past experiences is one of the core methods for a human to learn anything. I am probably introverted and quiet because I would hide in my room during the fighting. I am probably serious because I was forced to grow up quickly in the environment, I had to live in. Then again, perhaps these traits still borrowed heavily from other experiences outside of the home environment and this is just how they came to be. Mental health, growth, and development is a very ambiguous subject that focusing on just one aspect of a person’s upbringing and neglecting all external influences can easily be a detrimental analysis, but I digress.

Danny: I’ll let you know when I figure it out.

Are we anywhere closer to understanding how much nature shapes who we are and what percentage nurture gets? I’m really not sure, and I’m not sure anyone is, or ever will be. I mean, I know technology is rapidly advancing, but you think one day we’ll just have a scanner that tells us, oh, yep, you’re 64% nature, 36% nurture? Speaking of scanners, I went to the doctor this week because I’m having bladder problems (relax, I’m not peeing the bed, I just have to get up 3x a night) and they put a little device on me for 3 seconds and could tell exactly how much water I was holding… I thought it was fascinating. And don’t worry guys, I’ll keep you all posted – I know, you’re definitely invested on the health of my urinary system.

Okay, in actual closing, I do want to express my gratitude once again to the five writers that put this piece together. I couldn’t do this without you (literally, because then I’d just be fabricating stories).

Now go discuss Nature v. Nurture and let me know what you think!