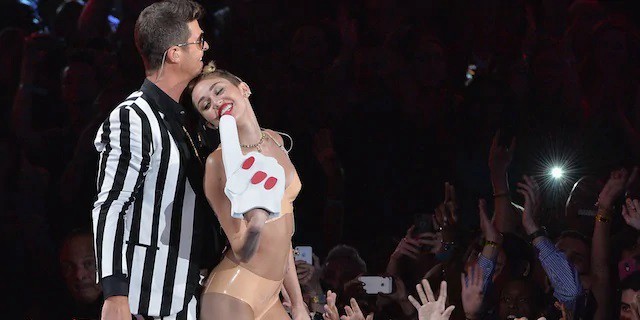 After my morning meditation, which lately has only lasted two minutes (having a puppy is ROUGH, get it? Ruff… no?), I typically jump on the time suck that is Instagram.

It’s for my future as a BOSS of my own business! *I tell myself*

And while I don’t listen to the Call Her Daddy podcast, I do listen to another Barstool pod, and honestly, who doesn’t enjoy their posts of drunk college students getting wild, Portnoy’s pizza reviews, and athletic prowess gone wrong?

PS – that girl who claimed to have “sucked off” seven of the Phoenix Suns players on the same night… yikes.

Anyway, as a big Miley Cyrus fan, I was intrigued when I saw her upcoming interview being promoted.

Obviously, we all know her from the rosy-cheeked, wig swapping days of Hannah Montana. And of course, there’s the unforgettable VMA performance she did with Robin Thicke in 2013 that sent the world up in a tizzy.

“How dare she go up on stage with hardly any clothes on?!”
“She’s supposed to be a role model to our children!”
“I used to have so much respect for her, but after that performance… c’est la vie!”

And, naturally, as humans, we’re resistant to change — especially when we think we know someone.

We feel blindsided… hurt, even.

We like our boxes nice and neat. Mom = loving and supportive. Trump = orange Twitter idiot. Miley = wholesome girl from Nashville that loves to ride horses and play guitar.

I mean, isn’t that what we’ve all been doing since watching George Floyd get murdered on video? Expanding our brains to realize the inherent racism it subconsciously formed, so we can unlearn.

I’ve caught myself doing it with people I’m on the phone with; when I think they should greet me a certain way and they give me what I perceive as short, cold responses, I have to redirect my thought pattern.

Maybe they just spilled scalding coffee on their lap.
Maybe their puppy kept them up, for the fifth night in a row.
Or, you know what? Maybe they’re just not a bright and chipper person, and that’s okay.

Further to resisting things that no longer fit in the box we’ve made for them, is understanding the power of authenticity.

I listened to Miley’s interview and was warmed by how she whole-heartedly embraced herself.

I was truly touched by her ability to remain earnest, as she joined a podcast known for all things sex.

She continued on with an explanation about the intention behind her new song, Midnight Sky, and the empowering music video.

“I wanted something anthemic that didn’t belong to gender, and I think I did it,” she beamed, continuing on about how much she loves herself.

We’ve all heard the arguments about men being praised for their sexual prowess and women being labeled sluts if they even suggest thinking about sex, but that’s not what captured me here.

What got me was a human’s ability to truly recognize who they are and be bold enough to honor that.

I mean, have you seen the Cardi B, Megan Thee Stallion music video?

I am reminded time and time again, there is no value in playing it safe… the universe is ready to create with you and help you form into the most ALIVE version of yourself you could possibly be. And to me, that is true happiness.

So go be the biggest damn advocate for yourself, because the world needs it.