Talk To Me About Your Childhood 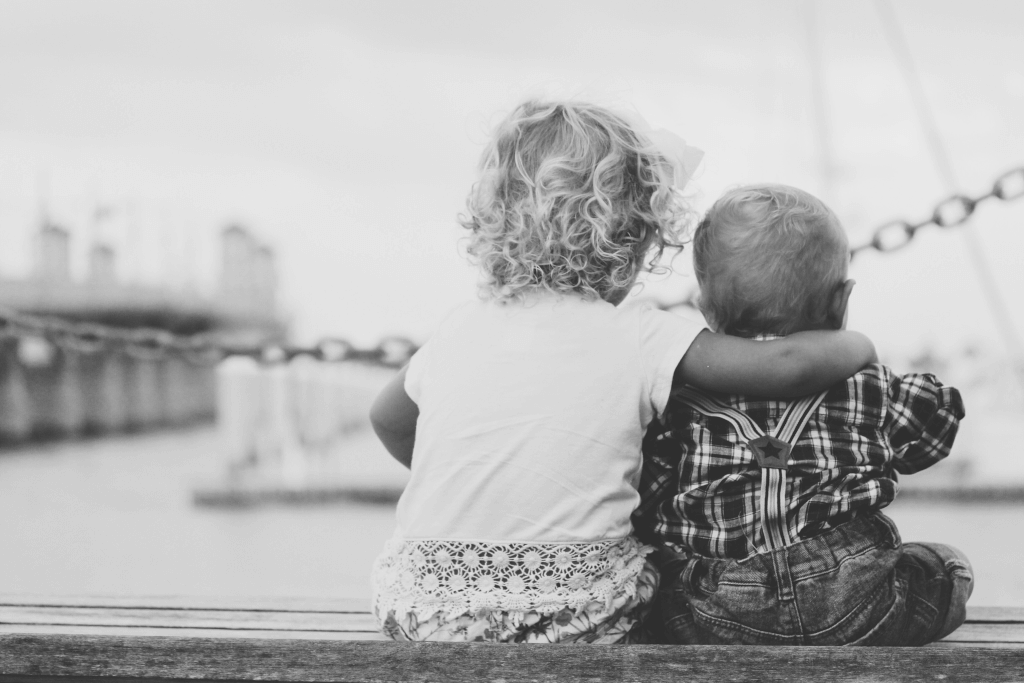 There’s no need for an introduction this time – you’re falling right into my interview!

I sit across from my sister – she’s wearing her short, flowy black dress, which nearly matches her long dark hair, and goes nicely with her black boots. Matthew always tends to make a comment about who she looks like – this time, he says Wednesday Addams. She sends a final text before turning her phone down and folding her hands together.

My (step) sister came into my life when she was six – I was eight… you can imagine what a major shift in dynamic that was. I remember being so upset when she wouldn’t talk to me because, as you can likely tell, I love a good conversation. I couldn’t fathom the thoughts going through her head, and through the years, even when we lived together after high school, opening up didn’t come easy to her. So, you can imagine my excitement when she agreed to sit down with me for this blog and really talk about something personal.

I lift off the chair momentarily to fold my knee and sit down on my right foot, asking if she’s ready; she gives me a nod and we jump right in.

“How would you categorize yourself?” I ask. She pauses for a moment before answering, “funny, witty, kind, spontaneous, and leary.” I tilt my head down without responding. I’m glad she sees herself in this light and don’t know if the same descriptors would have come forward a few years ago.

“Talk to me about what you remember from your childhood, before you moved in with us,” I keep my fingers sitting atop each key, leaning in slightly, eager to hear what her memory brings up.

She takes a deep breath and begins; “I remember there was a neighbor down the street I played with. I remember there was a pool in our backyard. I remember two of my mom’s boyfriends, and liking one of them… Jack, I think his name was. But mostly, I remember the day I left to live with my uncle. I was in class when a woman from the front office came in, telling the teacher I had to go – that my Grandma was there to pick me up. I was confused because I hadn’t left school in the middle of the day before…” I notice a tear start forming in her right eye, then her left. I tell her to take another breath, which she does, then goes on. “I don’t remember my Grandma saying much in the car, but when we got to the house, she told me to help pack my clothes – that I’d be going to live with my uncle for a bit. I must’ve blocked out the breakdown I had because after watching my clothes get thrown into a small suitcase, the next thing I remember, was sitting on a plane, headed for Colorado, having no idea where my mom was. I now know she was either in rehab, or worse… not in rehab.”

She doesn’t tell me much about the time with her uncle, which I’ve gathered was brief, but she expresses the need for her mom to come back and take her from this foreign new life she was living.

I adjust the autumn-scented candle burning on the table, but what I really want to do is get up and wrap my arms around my sister and tell her she’s loved and wanted; I know that’s not what I should do in this moment because that’s not what she needs.

With her eyes still glistening in the corners, she explains that dad (her bio dad, my step-dad, but also I call him my real dad – helllllo, modern family) had been visiting her regularly in Phoenix, so he wasn’t a stranger. She remembers him showing up at her uncle’s and taking her back to Arizona, telling her she’d be safe, in a new home.

“Can you recall what it felt like moving again, into another new house?” I ask, knowing what her answer would be.

“Yeah, I remember being scared. I didn’t want to talk to anyone… none of you guys, no one at school, not therapists… looking back on it now, I thought I would be abandoned again, if I let anyone in,” she offered, pausing before continuing because she thinks her next words may hurt; “I resented everyone for a long, long time.”

I smile sincerely and tell her I know… that we all know.

“As the years passed,” she tells me, “I was able to make friends, but my relationships with men were always awful, which I know stems from what I witnessed with my mom.” I tap down on the corresponding keys while keeping my eyes up.

We don’t need to dwell on the subject of men, as I know she’s still working on that…

“What about drugs?” I ask, “were you scared to try them?”

“Yes, I think once I understood why my mom wasn’t around, I made the decision to avoid messing with drugs. I was honestly never even tempted to try anything. I know I’m fortunate not to have that wired in me, because anyone can try something ‘just for fun’ and end up fully addicted. Being raised in Prescott shows just how many people are affected by the disease… as most of us have seen, it doesn’t discriminate.” I smile again because I know how right she is, and how fortunate she is to have a brain that just shut off the need to experiment or be pressured into doing something potentially damaging.

She talks about the friendships she gained in middle school, some of which were maintained through high school.

We exchange stories about all the times we got in trouble, doing the best impression of our dad calling us into the living room, *cue stern voice* “Darryan, let’s sit down for a talk.” She tells me how he thought she was drinking one night, smelling her breath, only to find something worse… her pierced tongue. I tell her about the time I backed into a car in our driveway and left without saying anything because I had a basketball game to cheer at. Ooops. We cringe a little, but mostly laugh while commiserating.

“So, once you turned 18, were you eager to meet your mom?” I wondered aloud, scratching my scalp before returning my fingers to home row on the computer. She adjusted in her chair before nodding.

“We connected on Facebook, actually. My mom reached out saying she wanted to meet me – she was living in Oregon so I asked my friend if she would come with me. I remember being so nervous on the drive to the airport, and throughout the flight. She picked us up and I cried right when I saw her… it was such a crazy feeling…” she starts tearing up again as she recalls the meeting. “She had a room made up for us and told us to make ourselves at home. I expected to actually spend time with her, but she stayed in her room for most of our trip.” As if she read my mind, she responded, “I don’t know if she was on drugs – very possibly. On the last day though, she pulled me aside and apologized for not being there… essentially making amends. I didn’t feel anything; I just told her I accepted her apology and thanked her for letting us stay there. I haven’t talked to her since – it’s like I just turned off that switch and never had a desire to connect with her again.”

I love how strong willed she is – once she makes a decision, that’s it – she sticks with her conviction.

I ask my sister when she truly started feeling confident in her own skin and she tells me not until she had her two-year-old daughter, Ivory.

“When I first found out I was pregnant, I was terrified, but didn’t even consider having an abortion. I actually really enjoyed being pregnant and then once Ivory came, I felt this overwhelming sense of love from everyone, and for her. Every time something came up, I would just know what to do… mommy instinct is a real thing and being a mom has made me so confident, despite the 9 months of postpartum depression…” the glisten in her eyes comes back, but this time, they’re happy tears; she continues. “I know I still have abandonment issues, but I’m making it a priority to only show my daughter healthy relationships. I understand that just because my real mom had me, doesn’t mean she wanted to be a mother… she didn’t want to change her lifestyle, which is fine – I don’t resent her for it anymore. I want to be better though. I want Ivory to know that no matter what she does, I will always love her and want her to be happy.”

She wants a message relayed to (step, but she doesn’t use that descriptor) mom and dad; she says how much she loves them, and how grateful she is for their constant support – that she feels more a part of the family now than ever.

I end, asking what she would want her six year old self to know.

She doesn’t hesitate; “It’s not your fault. Let people in.”