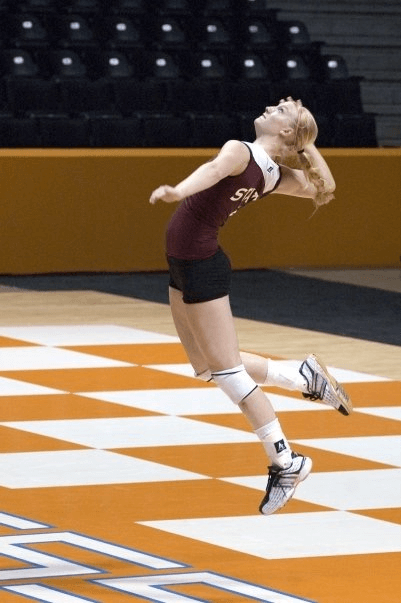 My name is Mandy Mellencamp (I’ve been married for four years but haven’t changed my name yet). I’m 29 years old – born in Tucson and raised in good ‘ol Prescott, Arizona.

I don’t remember my childhood ever being boring. My sister, Sara, and I always partook in an activity, whether it be gymnastics, volleyball, band or girl scouts every day of our lives since I can remember. My mom is a pharmacist and my dad works in mechanical engineering. Since I myself am a new mom, I asked them how they were able to be such loving, attentive parents while still working. They told me the best route was for at least one of them to work part-time while my sister and I were infants/toddlers. This is what helped me make the decision to quit my full-time job in the tech industry and go back to coaching volleyball part-time. I’ve found it’s easier to be away from my daughter if I’m doing something that I’m passionate about.

My sister is 2 years older than me, so she would trail-blaze every sport and I would start participating a year or two after her. First was dancing around age 6, then gymnastics at age 8, then volleyball at age 11. I think the gymnastics training really prepared us for being coordinated in our growth spurts. I was in gymnastics, volleyball, and band at the same time and my body was already telling me to slow it down (in 7th grade) so I chose to quit gymnastics and stick with volleyball as I was growing so rapidly… Seriously, I went from 5’7″ to 6’0″ within 6 months!

Gymnastics was great for developing discipline, coordination, and confidence, but it didn’t have the team aspect as much as volleyball, which I just loved more than any other sport from the first day I stepped on the court. I have made so many close friends because of volleyball and that’s because of the teamwork and camaraderie; you literally cannot win with just one star player. I definitely think I was blessed with the natural ability to play which in turn has brought me so many opportunities. After falling in love with the sport at a young age, I quickly realized I wanted this to be a part of my life forever – you could say I developed an obsession.

Naturally, I had the drive to pursue college volleyball; I started commuting down to Phoenix so I could train with the ‘big city’ teams to get looked at more by recruiters. It was a huge commitment and sacrifice by my parents, but it worked! After only two months into training, I received five offers and went on five visits to colleges, including NAU and Appalachian State. Once I visited Mississippi State, though, I knew it was the place for me; I loved the atmosphere, the campus was beautiful, and I was certainly interested in leaving the state of Arizona to get a feel for another part of the country.

I would categorize my time in college as quite difficult. No one can really prepare you for how straining and tiresome division one athletics are. I started college obsessed with volleyball and unfortunately, departed with a bitter taste for the sport. This isn’t to say I didn’t love playing with the girls I was with, but when you make a commitment to a school with and meet the coach you intend to be working with for four years and she quits after one, things can get dicey. The new hire was… well, I’m not going to sugar coat it… she was mean. She would verbally abuse the team and douse us with passive aggressive comments. As you could imagine, there was no shortage of anxiety or tears between us.

To pile on, after having the swine flu sophomore year and feeling extremely weak, my coach decided I was well off enough to play… well, I wasn’t. I ended up tearing my ACL which put me out for six months, but another positive – therein sprouted my passion for coaching. I was on the sideline witnessing and dissecting the other team’s mannerisms, and I was able to see how I would be as a coach myself – positive, constructive, and straight forward – so, the opposite of how we were treated. And hey, on the bright side, every boss or manager I’ve had since college has been an angel in comparison, AND my scholarship paid for my Bachelor’s Degree as well as my Master’s Degree in Business.

Something I feel worth mentioning is the fact that I never compared myself to others while I was training. I was simply always trying to beat my previous self; I was so driven to see self-improvement every single day. Maybe I have my parents to thank for my confidence, but I don’t recall ever thinking I was weak because of my gender or feeling less capable than the opposite sex.

To this day that remains true, as I still play in co-ed tournaments and compete against extremely athletic men all the time. And a bonus – I think volleyball (both indoor and sand) is one of the only sports where the women have more fans than the men. Call me biased, but in my opinion, you see much more finesse with women’s volleyball – we have the tactical edge which seems to always result in longer rallies. When I watch men, I can see it’s about jumping high and pounding the first ball away. I suppose that helps prove the well believed theory about women being more gentle and nurturing.

But what has really resonated with me, more-so than how we play or how I was treated by a coach, is that we can use the sport as an outlet. I really make sure my current teams have the awareness to channel their mood. We all have rough days and frustrations, but I’m telling you, there’s nothing like smacking a volleyball to release the negative energy. Even when I experienced morning sickness, I knew I’d feel better if I got up and did something rather than wallowing.

I think I’ve made it quite clear that volleyball and sports have been such a huge part of my life and turned me into the person I am today. I’ve been lucky enough to have great female role models along my journey and in turn, I’m confident, I’m a great teammate (regardless of whether it involves sports), I can communicate effectively, and I’m a great mom.

So ladies, believe in yourselves, and be that role model for someone else… I promise, it matters.