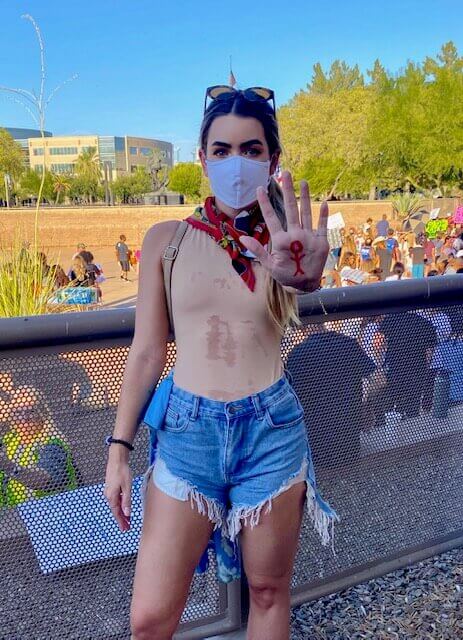 Be aware that I’m writing this on day two of my no-food detox so I’m feeling on edge… feisty, if you will.

Speaking of, I have a smashed Crumbl cookie sitting on my kitchen counter; despite my resistance to sugar over the last several months, I crumbled at the rally on Friday and grabbed two (don’t worry, they were individually wrapped minis) — I ate one and shoved one in my pocket.

This was around 7:35pm — two hours after we arrived at the event.

“Okay, the posters are in the back…” I pointed my thumb behind me as I pulled into the parking lot in front of the State Capitol, “I’m sure we’ll only be here for like 45 minutes, but you should still bring your water,” I suggested to my sister.

I certainly take responsibility for not realizing the length of the event; I’m sure it was posted on social media somewhere, but alas, it evaded me.

As we we arrived in the very open parking lot, I turned left into a spot, as a 50-something woman flashed her middle finger up against her windshield, as if to signal that she had the right of way… umm, hello, it’s a parking lot and I’m barely moving?

I gave her a nice smile, parked my unassuming Kia Optima and started gathering our belongings to endure the 115 degree heat.

“Woo, that heat’s like an oven,” I heard someone say…

I would’ve preferred the more twangy, ‘it’s hotter than blue blazes out here,’ but that’s just me.

We made our way around the Capitol building, following a few small groups holding posters — none of them were wearing masks, but I figured that’s because they weren’t with the collective yet.

Boy, was I wrong.

As we trotted closer to the gathering, seeing women selling t-shirts, people giving out water bottles, and Crumbl employees passing out sweets, the sentiment was clear — as a whole, these people did not take COVID seriously.

“But, Devon, you went to the event, too… if you were concerned about COVID, you shouldn’t have even gone!” I can hear that argument — trust me, and I thought about it… but something in me just felt deeply called to attend, and hey, I wouldn’t be able to write about it now if I’d just stayed home and watched reruns of The Office.

Which would’ve been looked down upon by the group, as I saw many signs about Hollywood’s silence. Or, according to the posters, Pedowood.

Now, just because I have more liberal viewpoints, does not mean I will blindly stand by celebrities that I’ve long admired.

For instance, I give a lot of credence to the claims made about The Ellen Show being a toxic work environment… I hope she takes the time to thoroughly evaluate the atmosphere she created and adjusts accordingly, because we’re now living in a world where people get exposed for who they really are.

That said, I will not assume that because celebrities are not broadly speaking out about human trafficking, that they’re all involved in an underground sex ring. Go ahead, call me naive; call me brainwashed for loving celebrities. But as we’re seeing, the truth always comes out, so if we come to find Chrissy Teigen has been participating in such heinous acts, you better believe we’ll collectively CANCEL her, along with anyone else in “Pedowood.”

Moving on from my beloved celebrities, allow me to introduce you part two of the I’m confused about what’s going on rally.

As I said, as a whole, it seemed pretty clear, the masses weren’t concerned about the pandemic that has sweeped our nation.

I heart things like, “I’ll care about COVID when people start caring about the kids,” which may be one of the most asinine things I’ve ever heard.

Let’s just dissect that for a minute —

You’ll care about COVID? COVID is not a movement like Black Lives Matter that you arbitrarily decide to care about… it is a disease that has infected nearly 5 million people in the US alone, with 160,000 deaths. Also, ‘when people start caring about the kids’? What does that mean? What people? You have over a thousand people at the rally… you have companies dedicated to this work; Arizona has funneled tons of money into combating trafficking. The celebrities? Is that who you need to see posting about kids in order to wear a mask? Because, I thought celebrities were the bad guys? Why would you need to be influenced by them in order to protect yourself and others from an airborn virus that continues to hospitalize people?

For two hours, we baked in the sun listening to speeches — from a mother who lost her child, a friend who called for legislative change, and a plea for the elite to sit down and eat their popcorn, because there would be a new Oscar winner in the midst…?

I’m all for legislative change, but what were they calling for? What exactly is the proposed legislation and what is being done to make that happen? What can we, as citizens of our community, do to help?

In the end, around 7:40pm, we made our trek around the Capitol building, chanting SAVE THE CHILDREN and while I felt like I was marching for something I believed in, I couldn’t help but feel I was in the wrong group and I’ve learned to listen to that inner voice.

I followed that dialogue to reach out to Together Rising — a non-profit company formed to aid in bringing families back together, fighting for equal rights, and helping communities heal. I thought, this is the type of group I want to parner with; people who’s beliefs align with mine; people who lift my spirits with their vision.

And they better respond… otherwise, I really need to have a heart to heart with my inner self and let them know I’m not mad… I’m just disappointed.