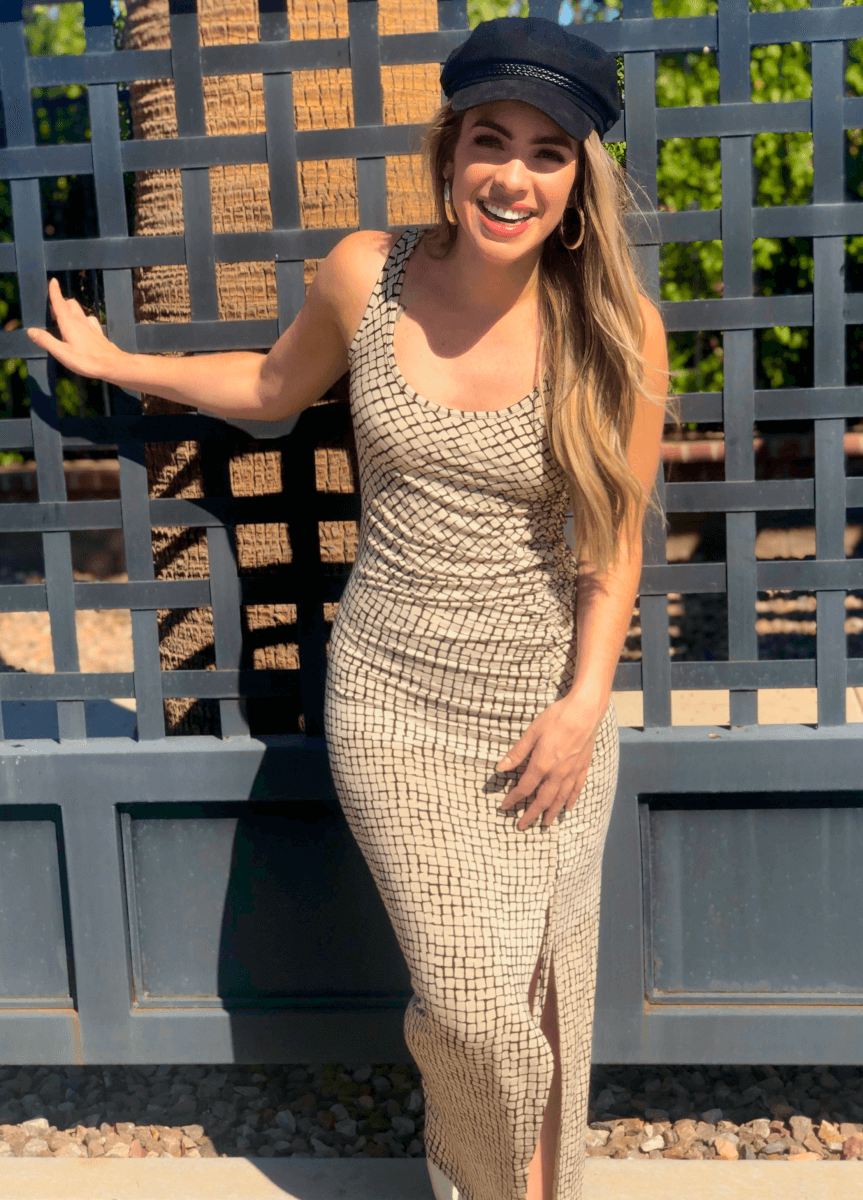 Finally, the opportunity has presented itself and I will try my hand at beauty blogging, though, maybe those girls (and guys) review products more or make recommendations to their readers? That’s not what I will be doing today, because that’s not what you’re here for, right? You don’t care that I use a Clarisonic face brush and an oil based cleanser, nor do you need an iGTV video on my nighttime routine. So, I will write about what beauty has meant to me over the years.

I started dancing at three, which is when I was introduced, first hand, to makeup; I would often see the older girls come to practice with a full face on and I’d get so excited to wear lipstick – I just loved how much it could accentuate your features. I was allowed to wear makeup sooner than “normal” because of dance – my first recital number was to Mickey Mouse’s Birthday Party and I rocked a puffy pink dress, along with blush, mascara, and bright pink lipstick. This went well with my short hair that I’d chopped off upstairs one day while my mom thought I was napping… clearly I didn’t attribute long hair to beauty then, which I suppose holds up, despite how much of it I have now.

Although dance opened the door and introduced me to the world of makeup, I think I would’ve been drawn to it at a young age regardless. I can still vividly remember the smell of my mom’s Covergirl powder, which I would play with, in addition to the pink bottled mascara, with the green top. I wouldn’t say I assigned makeup to beauty though – I just enjoyed playing with it, similar to how I was entertained when drawing a picture… it allowed me to be creative.

As I didn’t have a true sense of who I was in my early years, I would equate something external to beauty. I had to have the matching outfit from Limited Too, perfectly painted nails, and the exact right butterfly clips, otherwise, I feared I wouldn’t fit in with the other girls in my class, which is where all of your confidence comes from as a child – or, at least mine did.

Once I got to middle school, I was more easily influenced by television – I mean, who didn’t want to be Britney Spears or Christina Aguilera? I actually remember feeling pained by the fact that I couldn’t have those pants she wore in the Dirrty video. Although I wore heavy makeup for dance recitals and competitions, I didn’t start regularly applying it until middle school – 7th grade, probably. The cheap foundation my friends and I got from Target didn’t even come close to matching our skin tone – I can still envision that line we had, breaking up the bottom of our jaw and our neck, announcing to the world “I don’t know how to do makeup.” That, in addition to the white eyeliner, blue braces, and Rocket Dog foam flip flops, was a LOOK.

Once I got to high school, I learned a bit about skin care, which was mainly just to wash my face every night and apply a moisturizer (no awareness of what brands, or what to avoid in products). I wasn’t eating well, which started to show during my sophomore year. Who knew crumb donuts, Taco Bell, pop tarts, and Sonic wouldn’t do your body any favors? I’d like to say I educated myself then, but really, I think I just cut back a bit and exercised a little harder, which seemed to get my metabolism back on track. I wouldn’t say I was obsessed with my figure, but I wore a mini skirt for pom almost every Friday night, so I wasn’t keen on busting out of it as I went up for a toe touch… ooh, speaking of – I remember my pants came undone during a dance number when I was about seven. Man, I handled that like a rockstar. In high school, I’d say I wore minimal makeup, and beauty for me then pretty simply meant getting approval from guys. Again, more external validation.

After graduating and moving to ASU, into a dorm room known as the “fourteen floors of whores,” I was exposed to so many different, beautiful women, many of whom were very promiscuous, but that’s beside the point. At the time, ASU had about 60,000 students enrolled (I’m sure that number has only gone up), which meant you saw a beautiful human being every few steps. To be honest (as if I haven’t been up until now), I felt very insecure – it seemed everyone had a personal trainer, stylist, hairdresser, and makeup artist. I started becoming more aware of MAC and Sephora and overindulged in clothing purchases. I became friends with some rich girls at school and, again, felt the need to fit in when we went out to frat parties. I would soon start clubbing, and went all out – I think makeup artists call it baking now… where you paint your concealer and foundation on, then put thick glops (spellcheck is saying this isn’t a word, but it’s the only thing that makes sense) of powder over the top and let it sit before brushing it away and adding bronzer, and blush, and more eye-shadow, and a thicker cat eye, and more mascara over the false lashes… can’t forget the Sally Hansen tanning spray. Okay, thinking back on that now, I’m kind of impressed with the commitment – I mean, we would sometimes go out 3+ times per week.

In addition to going out regularly, with a full face of MAC on, I was still eating poorly – bible – zero attempts to be healthy. Oh, this mixed drink is filled with sugar? Perfect. Loaded nachos at a restaurant before going out? Yes please. We’re stopping at McDonald’s on the way home after a long night? Great. This is when my skin really starting betraying me, breaking out often, which obviously makeup does nothing for. I would make it a priority to wash my face every morning and every night, which made zero difference. I had no idea what was causing these flare ups, so I just continued as I was, chalking it up to bad luck.

Once things went completely south with my ex, I moved back to Prescott and kind of started to eat healthier, though the effort was minimal. If I went to dinner with some friends, I’d have no problem splitting fries, as well as a dessert, because, hey, I’d started hiking and being outdoors more.

Prescott is where I met my now-boyfriend, and I was still donning the overstated eyebrows and weird pink lipstick… bless his heart for seeing through that. I was in a weird mental space when we started dating, and used alcohol as a coping mechanism for a few months. Matthew would be patient and loving with me, showing zero signs of judgement, and he would be the first boyfriend I had, that I didn’t get bored with or think “yeah, no way this is lasting.” Now, I’m not saying a boy is the reason I started to love myself more, but his presence did not hurt, in addition to the therapist I’d see on a weekly basis.

I’m not the best with timelines, so I’ll just say some years later, I decided to purchase a food allergy test (link for a discount is on the blog) which told me I had an extreme sensitivity to dairy, wheat, cauliflower (what?), and red kidney beans. So, I would start my elimination journey, which was HARD as f… it was hard. Seriously, dairy is in almost everything, and at the time, you weren’t finding cashew cheese or even goat cheese at Frys or Safeway, but I stuck with it and found myself breaking out less and having more energy throughout the day.

From there, I would start my obsession with health and wellness. I’ve made a real effort to educate myself on what I’m consuming, why it’s important to buy organic, and eat vegetables that are in season; what makeup I’m putting on my face, and what I’m taking my makeup off with (bye, Neutrogena wipes that I loved, hello Bamboo cloths). Meditation also became part of my regular routine, in addition to gym sessions 3-4 times per week.

So, what does beauty mean to me now?

Being in alignment in all areas of my life – meditating regularly, consuming healthy food that will fuel my body, maintaining my relationships, exercising consistently, writing in flow, and sleeping eight hours. I just read that list back and realized makeup isn’t on it… that’s not to say I don’t wear it, because I do. And I’ll still throw some false lashes on when the occasion calls for it, but I don’t attribute my beauty to how well I can do my makeup now. Plus, I was just at my friend’s place on Sunday (hi, Sara) and a sweet little angel told me I had good skin… see what happens when you take care of yourself? Magic. You’re a wizard, Harry. Okay… I MUST do a blog on Harry Potter at some point, right?

How’d I do on my beauty blog? Let me know – seriously, I care.