From Rosy Cheeks To Crows Feet 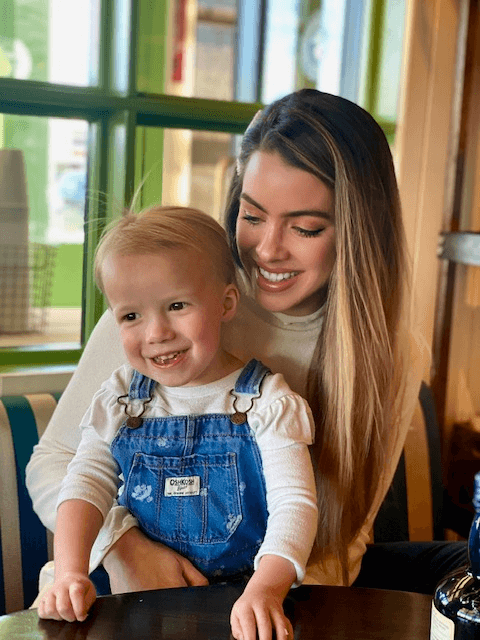 From a young age, maybe seven years old, I realized how quickly I wanted to grow up. But not grow up to get married and have children… I just wanted to be in my twenties and function in the world as an adult that could do whatever they wanted, which in my head, consisted of something different each day. Sometimes I’d envision myself as a teacher, other days as a professional dancer, I had a (long) spell of “I’m going to be famous,” which turned everything into a show. I would always pretend I was on camera – when I cleaned the bathroom, when I hung from the monkey bars, when I put on a sequin dress from my trunk of outfits, and even when I was playing The Sims (you guys remember the rosebud cheat?).

It didn’t help that I was always the youngest in the class either… I remember practically burning with shame when everyone else got their period. It made me feel young. It made me feel left out. It made me feel small. I know, reading that now seems silly – who the hell wants to deal with bleeding once a month? But it wasn’t about suddenly needing new underwear, I just felt like everyone would grow up before me. All the girls I danced with were older and I looked up to them with such adoration.

One night, I had the great fortune of being invited for a sleepover at Dani’s house! She was three years older than me. This was a big deal. Her mom must’ve walked in with a basket of laundry which I’m sure I offered to help put away, envisioning the camera on me as I neatly folded, showing the audience how to hang a t shirt (damn… and we never would’ve known Marie Kondo). I lifted a white padded bra with a dainty bow in between the cups and Dani could tell I was in awe.

She knew it wouldn’t fit me… my nipples were the only thing “protruding” from my chest, but I was willing to give it a go. We were all used to changing in front of each other at competitions, so I wasn’t shy (though, this is where the camera can leave) – she had to show me how to clasp in the hook and adjust the straps. I stood up and looked in the mirror. If I was standing perfectly straight, the cups would touch my skin, but if I bent forward, there was a two-inch gap between the fabric and my “boob.”

“Here, put this shirt on. See how it feels.” She handed me a white tee from the hamper.

As I pulled the cotton over my head and gathered the material behind my back to make it tight around my torso, I had my first glimpse into my own womanhood. She told me I could keep the bra since she was growing out of it, and I wore the shit out of it… I called myself out for it in the locker room so none of the girls could make fun of me (I’m sure they all did behind my back). Unfortunately, though, as the years passed, my boobs remained the same… I would get over my flat-chested issues at some point in high school.

Now speaking of high school – I entered at 13, which meant everyone got their permits and driver’s licenses well before me, including the junior that would teach me how to drive his blue Nissan Pathfinder. He told me I was an old soul, which may have just been a line, but I ran with it. He told me I would be prom queen at 16 (I wasn’t) and that by my late twenties, I’d be building something of my own (he was right about that).

Starting college at 17 carried the same sort of stigma for me; everyone else was 18 or 19… not that I wanted to run out and buy cigarettes or get a tattoo… and I certainly wasn’t looking to give blood. I’m actually not sure I can even pinpoint the problem – maybe the thoughts just lingered with me and I’d become to know them and accept that they’d swing in with regularity.

Once I had my fake ID, I felt I could breathe… I know, it sounds really stupid, but it’s true. I could join my friends out on the town, I could go to Vegas for their 21st birthdays, and I could buy a bottle of SKYY Vodka at the grocery store. LIVING.

As I entered my 20’s, though, I realized there wasn’t a magic portal that made you an all-knowing being. I realized I was waiting for something that simply wouldn’t come with age. I realized that eating well would be essential and that it looks different for everyone; that being a martyr never gets you the attention you desire… I realized (much later) that everything in my life reflected what I put into the world.

Fast forward to my late twenties where I’ve truly never been more confident, but that doesn’t mean aging is easy, especially in a world where Instagram filters smooth our skin, thin out our nose, make our lips bigger, and define our jaw line. I had my niece all day on Saturday and legitimately wondered if we could just switch skin… she’s working on being able to poop in the toilet – she doesn’t care about having perfectly plump and pigmented cheeks. I’ll pose the question to her during her 3rd birthday – we’re hosting it at our house, so I think it’s a fair trade.

In addition to external youth and beauty, aging means I often find myself thinking about the mark I’m going to make as an actual adult; how to keep growing, how to stay motivated and driven, wondering why I’m not running a company by this point and if I’m too late. And I don’t have the answers… all I can say is that I’m trying to be mindful – trying to stay more present, because it’s really a dance, isn’t it? Planning for your future, while being content in the moment.

If you were to rate your life every day, out of ten, what score would you give yourself? How do I feel as soon as I wake up? As I’m brushing my teeth? While I’m vacuuming, grocery shopping, or stuck in traffic? Am I thinking of the next thing I need to do, or the next time I’m getting out of town? Next, next, next… if I’m honest, the answer to that is often, ‘yes’ which I’d like to change. Sure, I’m looking forward to a February full of events, a trip to California in April, and wherever we decide to go on vacation in August, but I’m also thoroughly enjoying writing this blog, right now.

So, to wrap it all up, I think the moral of the story is, find someone flat-chested and give them a padded bra.