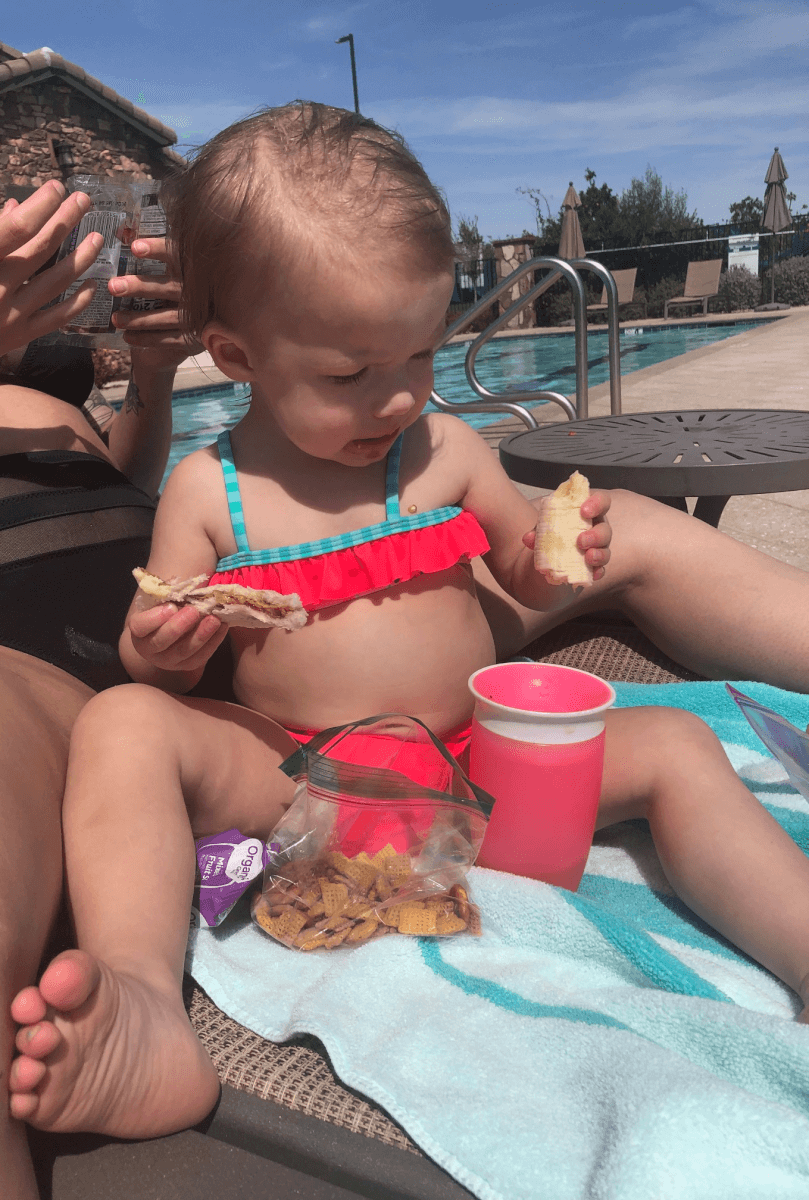 FOOD – Wow. What a broad topic with so many potential paths to go down. I feel like I’m at a stop sign, but instead of being at a four-way stop, it’s a 978-way stop, and Google Maps isn’t working (does anyone actually use Waze?).

Instead of taking any of the 978 paths, though, I’m inclined to drill a hole, then maybe dig a tunnel, come back up, stroll down on a Bird scooter, fall off, take a roller coaster… you get the point.

Back to the topic at hand – food.

As a child, anything with cheese was my favorite, and honestly, still is. That white macaroni and cheese from Outback… are you kidding me!? String cheese, gouda with crackers, extra provolone on a Subway sandwich, chive and onion shmear (yeah, that word creeps me out) on a perfectly toasted bagel… hmm, should I just make the rest of the post about different cheese / dairy recipes and we can all be inspired to bloat ourselves? I’ll spare us. I can recall the staple snacks most of us 90’s kids had while playing the Sims or sitting in the loud cafeteria that always smelled like the cardboard pizza they served. We’re talking cosmic brownies, dunk-a-roos, star crunches, the sugary hi-c drinks, and of course we can’t leave out honey buns.

Genetically, I was not predisposed to diabetes or any scary health-related issues that would warrant a closer eye on my food intake, so I had the glass of milk (that we were told was good for us), the pasta smothered with five different cheese sauces, the french-fries dipped in ranch dressing, and the cheesy gordita crunch from Taco Bell. No, scratch that – everything on Taco Bell’s menu was up for grabs. Maybe it was a combination of age, genetics, and how active I was, but weight was NEVER a concern for me. But weight really shouldn’t be the only measurement on health, should it? In fact, in my opinion, weight shouldbe one of the last things we look at when considering our health, yet, we (many of us) still fixate on the scale as the flashing lines turn into numbers, showing how many pounds we’re currently walking around with… I’m jumping ahead of myself here, though.

Throughout middle school is probably when I was busiest with dance, which meant I wasn’t sitting down for a family dinner most nights. Hellllo, easy mac – just some water, hard noodles, disgusting (really delicious) cheese powder, and a microwave; I was satisfied.

My habits remained consistent throughout high school and we had the option to eat off campus, so the crew would frequent close spots… well, really everything was close, which tends to be the case when you live in a small town.

Sonic was a popular choice, as many of us could park next to each other and walk around, eating our corn dogs and sipping on an ocean water or cherry limeade. I actually have such vivid memories sitting at those tables with Robert Caldwell… oh, Robert, I hope your soul is having a thrilling Bob-A-Palooza, my sweet friend.

I will say I had a decent weight gain my sophomore year, which could certainly be attributed to Smirnoff Ice and Hypnotiq / Sprite drinks at woods parties, but that fell off pretty easily with my journey into bulimia. Once I discovered how easy it was to eat EVERYTHING I wanted and purge it out, it became a compulsion. I won’t dramatize my eating disorder and tell you it got “so bad” I had to receive treatment, because it didn’t. What became a compulsion my sophomore year dwindled down into an “every now and then” type of thing that would later go away.

As I navigated my way through college, though, life became… trickier, we’ll say. It was common to drink Thursday through Sunday every week, at least for many ASU students. I had a complex for wanting to be associated with who I thought were the cool kids, so for a time, I joined in on the “fun.” Plus, I had a preloaded Sun card (thanks, Grandparents) which meant I could go grocery shopping on campus or eat wherever I wanted in the Memorial Union. Um, okay, yes Einstein’s Bagels every day and Jamba Juice smoothies packed with sugar and milk. Perfect.

In college, I really started to notice how food and drinks were affecting my skin, which I’ve talked about previously, but I didn’t have a primary care physician in Tempe, nor was I interested in getting one. I also thought it was something I’d just have to deal with, not even mildly considering a breakout could be attributed to what I consumed (clearly, a very smart college student).

After college, and the rise of social media, I became more conscious of what food can do for a person. I began to understand how protein could satisfy my hunger for a longer period of time, and what nutrients I could get from eating greens. I realized that age doesn’t mean your health or body have to deteriorate.

Now, I can derive so much joy from going to the grocery story and picking the perfect avocados, knowing they will pair well (for me) with black beans and sweet potato. I get excited when I’m meal prepping now, and when I’m eating something that I know will fuel my body and give me energy for a long workout (PS – yesterday I did this workout called Pound and it was so fun… my body is so sore).

I’ve also learned that I have to be very specific when I’m at a restaurant, telling waiters I will essentially die if they put cheese on my meal (then having to explain a little butter is okay… and then they just think I’m dramatic).

I’ve also learned to be aligned and listen to cravings in a way that doesn’t make me feel heavy or lethargic; if I want something sweet, I’ll take the time to grab some dates and mix them with oats, the right oil, some coconut flakes, crushed nuts, etc.

This is not to say I’ll never have a cookie because it has sugar in it, or that I’ll never eat in-n-out fries smothered with caramelized onions and special sauce, it’s just that I’m self-aware now. I KNOW how the “shit” will affect me.

I’d like to end (I realize this doesn’t flow well, but to be fair, I did warn you), by commending some huge names in Hollywood that have made it a point to talk about the eating disorders they’ve had and overcome, or may still be struggling with, because in 2020, we’ve never had more access to everyone’s lives, which can easily yield a self-hatred or an eating disorder.

Taylor Swift has a powerful message in her new documentary, Miss Americana, about starving herself before she would perform, going from a size 00 to a 6, and being happy, but still catching herself look at photos with disappointment – it’s a real glimpse into what so many of us go through consistently. Lady Gaga’s ‘Born This Way Foundation’ connects people with resources to help with things like bullying and body image. Elton John has openly talked about his bulimia, a disease he shared with his close friend… some of you may know the name – Princess Diana. Lena Dunham’s weight has fluctuated due to eating habits and medical problems, which she’s openly shared with the public after her split with Jack Antonoff – I just love the way she writes; I found her food diary such a delight – if you feel so inclined to read, https://www.elle.com/uk/life-and-culture/culture/a29335127/lena-dunham-food-diary/.

Though no one is claiming I’m perfect, I just want to be one more voice that says I’m trying… I’m trying to treat my body right which can change from day to day, I’m trying not to compare myself to others, but I still do, I’m trying not to get discouraged by a number on a scale but alas, I still do… I’m really just trying to live a balanced life, but it can be damn hard, even on a good day.

The point is, become so in touch with your body you know exactly how to nourish it.

Don’t do what LOOKS best for a photo, don’t feel inclined to follow the next fad diet, don’t force yourself to eat completely plant based because that’s what a new Netflix documentary says.

PS – Happy Birthday, Ivory! As you can see here, she’s all about balance.