Confessions of a 23-Year-Old Suffering from Depression, by Dylan Zawicki 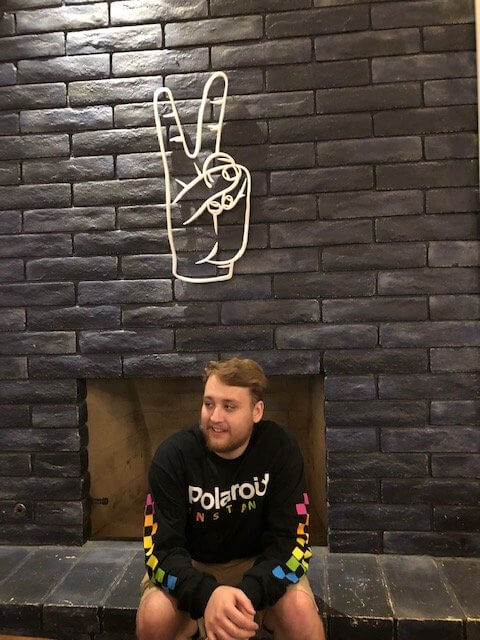 I’d consumed 350 Advil, 70 Propranolol, a pack of Claritin, and an entire bottle of NyQuil, followed up by two gram-sized dabs of wax, and a couple bong rips.

This was after I fashioned a noose too small for my head to fit through and had to improvise by raiding the kitchen.

The year was 2016 and it was my fourth suicide attempt.

I grew up with two older sisters and two incredible parents that loved me incessantly. I played t-ball, soccer, and hockey, and if I wasn’t at a game, I was at one of my sister’s dance competitions. Her friends were beautiful and gave me all the attention while the moms would comment about how I should be a little GAP model.

From the outside, everything was picture perfect, and even behind closed doors, I had a rosy upbringing.  Nonetheless, I had this black cloud looming over me from as early as I can remember.

Even before finding out something was wrong with me, I just knew I was different.

But not different in like the cool way, where you bury your head in books and ultimately take over the tech world (hi, Steve Jobs, Bill Gates, Elon Musk)…

I really tried to fit in with the other kids, laughing at jokes I didn’t understand or even laughing when I was being made fun of; I just wanted so desperately to be accepted.

It’s not that I was necessarily bullied, I just felt uneasy… broken. I would get home from school, walk up the wood stairs to my perfectly normal bedroom, and just cry. I’d berate myself for not getting someone’s humor and let the intrusive thoughts run on a loop.

I always held in my tears until I was alone because I was afraid of what people would think of me. My dad is such a strong man, and I felt like I had to be the same way; I thought crying made me weak, so I would hide it.

One thing that depression teaches you as a kid, is how to hide things. My family didn’t know what I was going through until my first serious suicide attempt, but I was eight years old the first time I thought about it.

Before school, I went into the perfectly clean kitchen, found the biggest knife I could, and just held it to my chest. I sat there for a little, thinking I could just do it, plunge this knife in my chest and end the pain… no more trying to fit in, no more crying; I could just be done. It’s not even that I wanted to die… I just wanted to be done.

I felt so uncomfortable being and felt so alone in my head as I constantly reiterated my feelings of unworthiness, both with my body and my mind.

A week before my 19th birthday, I remember listening to Suicidal Thoughts by the Notorious B.I.G. and really feeling how much it resonated. I was crying so heavily I could barely see the road… I had this overwhelming pain in my chest, and I knew cutting wouldn’t relieve it, so my mind started spinning.

I convinced myself I would take my life with a rope. So, once I got home, I found some, tied a knot to form a noose and put it up in the backyard, but once I stood on the bench, I couldn’t get my head through because I made the hole too small, so I decided it was just the wrong out.

You know what happens next…

After I understood where I was, with my mom still hovering over me, I let the shame of what I’d done weigh heavily.

Within minutes, I was walking down the same wood stairs, to see our living room full of first-responders, and of course I became even more embarrassed – I was facing this new reality where I had to look my loved ones in the eyes.  They knew I’d just tried to kill myself and that was a hard pill to swallow (pun intended).

So naturally, I was stabilized at the hospital, and transferred to a mental institution… I pleaded not to go, promising I wouldn’t ever do that again, but understandably, my parents weren’t buying it, so I rode in an ambulance for 90 minutes on the way to crazy town.

I felt even more out of place at the facility, even more isolated. Everyone I met in there had a really hard life, with a reason to be depressed, anxious, or suicidal.

What was my excuse? I had a great home life, nothing wrong with me physically, no real trauma… I couldn’t even fit in with the people in the hospital and it started to feel like that would be the story of my life. Dylan, the guy who doesn’t belong anywhere.

What was worse, was how the suicide attempt impacted my family – how it made them feel.  Their hurt compounded my depression even more, and I was convinced I’d never get better… that I would just be stuck in this life of constant pain.

Despite feeling hopeless, and just trying to stay alive so I didn’t hurt my family, my mom continued to seek help, finally suggesting a procedure she’d gone through, called ECT.

A lot of people tried convincing me not to move forward with it – that it’d turn me into a vegetable, which would’ve maybe been true 60 years ago, but the science has evolved significantly since then.

Even still, I backed out of the first appointment, forcing myself to return the following week, because really, what did I have to lose?

Turns out, nothing, but that didn’t mean the road to better days was easy or miraculously fixed after a few sessions.

When I think about how to describe it, it’s like I was born with this thorn in my foot that I didn’t realize wasn’t supposed to be there. It just kept getting wedged deeper and deeper, day after day, until I really committed to therapy, ECT, constant doctor’s visits, and different medications.

And even then, the “removal process” was painful. I experienced a lot of anxiety, anger, and of course, sadness, all of which I still go through to this day.

This is the part where I tell you the recovery process was tough but worth it because I’ve got it all figured out, but the truth is, I don’t.

My medication has been changed three or four times now, and it makes me gain weight, so while I don’t feel suicidal, I do feel unmotivated to spend time in a gym, and plus, leaving the house still brings me tremendous anxiety.

I have to give myself a pep talk before I go to the grocery store or pick up my medication… “no one’s looking at you, Dylan… everyone’s in their own world, probably listening to a podcast while picking out ripe avocados… it’s not a big deal,” I’ll tell myself.

And here’s where Devon asked me to get really honest…

“How do you spend your days?” she asked.

“Honestly, I’ll do something around the house like pick up dog poop or wash the dishes, then I’ll spend most of the day playing video games, watching movies, or scrolling through YouTube,” I answered.

“And what are your eating habits like?” she pressed.

“Mmm, I eat like crap, but I enjoy it, and I really don’t like meal prepping,” I noted, recalling a time when I would eat broccoli and plain chicken after spending at least two hours sweating at the gym.

“Okay, so what do you see next then, Dyl?  Because you’re extremely smart and capable… what do you want out of life?” my sister sounded eager.

I told her I want to go to school for herbology and work in a dispensary, so let’s hope Arizona steps up and votes ‘yes’ on PROP 207.

She urged me to think bigger, to believe in myself and push myself, which I will, but for now, it’s baby steps.

So there you have it, the confessions of an anxious twenty-three year old.

In closing, if you have any inclination to talk to someone about your emotions, racing thoughts, or even depression, please listen to that voice, especially now, when it’s easier than ever to connect virtually, and they’ll never know you’re wearing the same sweatpants for the fifth day in a row.