Am I Parenting Right? 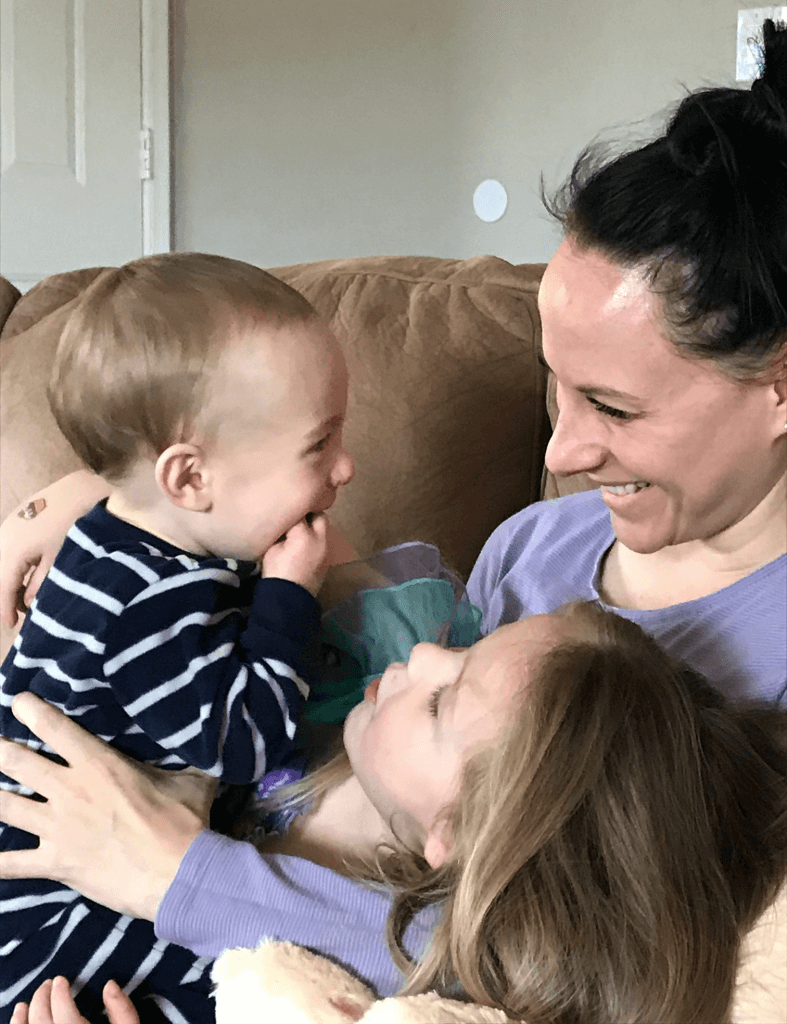 First, let me start by saying this is one of the most refreshing reads about pregnancy and parenting I’ve ever consumed, not that I’m sitting around reading ‘how to be a parent’ books during my free time, but still… she doesn’t put a rose-colored lens on her experience, which I’m sure so many people will appreciate. So please, enjoy.

Hi everyone, my name is Kristin. I am a 36-year-old mom of 2 who was born and raised in New Jersey. I moved to Arizona about 8 years ago… but that is a story for another time.

Growing up, from what I remember, I was sad a lot. I was painfully shy and never really felt like I fit in anywhere. I had a sister who I looked up to for as long as I could remember and still do to this very day. I don’t ever see that changing either. When we were little, her and I would pretend our dolls were kids and our rooms were apartments, but I never really had a strong desire to have kids in real life. I just figured I would probably have them because that’s what you were supposed to do, not because I actually wanted them (yikes).

As I grew up and began dating, I went through a plethora of bad choices with a rebellious flare. I was drawn to the noncommittal type who wouldn’t treat me right but make up for it in gifts. Sad, I know, but that was me. I met my now fiancé, Tim when I was 29; we started off as good friends, and he would be the first guy I actually trusted. I was so afraid to make the leap into a romantic relationship because I convinced myself it wouldn’t end well. Despite my best efforts though, his persistence got me, and he would become “my person.”

We never really talked about having kids but also weren’t doing much to prevent them either. We would say, “what are the chances?” Well… they were good. The chances were good. Here we were, a missed period later – pregnant. We were reluctant to tell many people. It was so cliché. Just started dating, got pregnant, blah blah blah. The Catholic guilt of not being married really set in and the only person who knew was my sister, Lisa. She actually didn’t even believe me first, or she was just in shock, but once she accepted my reality, she would be my biggest supporter, outside of Tim, obviously.

Unfortunately, or fortunately, around 6 weeks and after our first doctor appointment, we miscarried. Now, I have to be honest and say this was the best thing that could have happened to us. Sounds awful, I know, but we weren’t ready. His reaction to the news was confirmation that he was in fact, my person. The way he loved and supported me through the experience was the most beautiful expression of what a partner should be, and I knew then, our love wouldn’t just be a phase – it was real.

We decided we should wait a little before starting a family and, I would start birth control. We wanted to continue to grow as a couple before we brought little ones into the picture. So, I waited for my period, and waited some more… the universe has quite the sense of humor – I was pregnant right away. We decided to go with it.

The pregnancy itself was surprisingly, pretty easy. I didn’t really have any morning sickness and I gained weight mostly in my belly, which I was shockingly okay with. I would say the hardest thing about my pregnancy was the shame I felt around it. The fact that we weren’t married or together for very long kind of put a damper on enjoying the experience. I let what I believed others thought tarnish what I should’ve been enjoying. Big regret, because who cares… right? People aren’t sitting around judging me, and if they are, that’s a reflection of them, not me. I suppose hindsight is always 20/20.

When I had our first, Emma, I loved her; she was a sweet, perfect little angel. I must be honest though, I did not have that overwhelming ‘my life is now complete’ feeling when I held her in my arms for the first time. I was tired, missed my dog, and overall, felt a little inconvenienced by the whole situation. It’s a lot, guys. Oh, and healing… things are pretty messy for a while.

We brought our new little stranger home. Her and I spent the next few weeks learning about each other and creating a very special bond. The bond I thought I would have felt immediately after holding her for the first time. Despite this amazing gift though, my world felt like it was flipped upside down. Leaving the house was a tremendous task that often didn’t feel worth it. I struggled to ask for help and didn’t have many options even if I did muster up the courage. Mom guilt was real, as was my anxiety, which was through the roof. I wondered if I was a bad mom if I needed help.

I longed for the village “they” talk about as I found my new life to be very lonely and isolating. If I left the house alone, I felt guilty. If I didn’t leave the house, I felt guilty. Oh, and let’s not forget about the new level of tired that I didn’t even know existed.

Around 6 months into my new role as a mom, things started to brighten up. I learned what Emma needed and we had a routine. She smiled at me now and my heart grew bigger with each one of those. Watching her grow was incredible and her personality blossomed with each day, into a person I could not imagine life without. My anxieties and depression began to level out and I was starting to feel normal again… my new normal at least.

I remember looking at Emma one day; we were in the kitchen and I literally felt like I had too much love for her and needed another baby to share it with… plus, I wanted Emma to have a sibling. A sister, to be specific. They were going to grow up to be very best friends just like Lisa and me. That was the plan.

Tim and I talked about it and he was pretty indifferent, which I took as a green light. Next thing we knew, another positive pregnancy test later, baby number two was on the way. This go around, I spent far less time dreaming of what it would be like and more time chasing after a toddler. Less naps, more morning sickness. What an emotional roller coaster too. I was happy, then scared, then sad, then excited, then, then, then. I was going to miss it just being me and Emma, but also couldn’t wait for our new addition. It was a weird time, to say the least.

We went to the gender ultrasound and the technician said, “It’s a BOY”. What?! No way. What am I going to do with a boy? I don’t know how to be a mom to a boy. Are you sure? Tim and I were both floored. We left and went to a diner and ate pancakes mostly in silence. A boy? Emma was supposed to have a sister. That was the plan, remember?

The pregnancy with baby #2 was rough. In addition to my horrific morning sickness that seemed to last forever, I would experience severe pelvic pain; some days, I thought my pelvis would snap. Walking would become increasingly difficult, especially at the end, and then moving became an actual chore. I was absolutely miserable.

BUT! Cameron came into this world fast. I was barely in the delivery room and he was ready to arrive (thank God). It was like I pushed, and there he was, and as soon as I heard his cry, I felt that warmness in my heart, telling me our family was complete. Emma came to meet her new baby brother in the hospital and was instantly as in love as I was. The next day, I packed up my adult hospital diapers and we headed home, receiving the most special welcome from Emma and my dog. It had been the first time I was away from Emma that long… a whole two nights. Emma wanted to hug, help and cuddle her little brother, which was such a relief because I wanted to make sure neither child felt emotionally neglected in anyway.

Turns out, Tim was the one to feel a bit slighted, as he didn’t bond with Cammy right away, though, that’s normal for males, I think. Babies rely on their mom for almost everything for the first 6ish months, but after that, the two of them became pals, outside of the screaming tantrums that would arise.

Since Cameron has gotten here, our family feels complete. Hearing him and Emma laugh, and play, makes my heart nearly explode. She loves being a big sister and he is such a great little brother. While I was pregnant, I often wondered how he would fit into our family and now I can’t imagine it without him. Watching these kids grow into little people with their own personalities has been such an incredible experience, and watching Tim be the amazing father that he has grown into is indescribable.

So, moms and moms to be… listen to your gut. I promise you know what your family needs best. Try not to compare your life to other people. Everyone has something they struggle with, some just hide it better; go easy on yourself. We are all just trying to do our best and we all want our kids to be happy, which looks different for everyone… so just be you, unapologetically.

Instagram Poll Results: @Coffee_With_A_Question Mon: Do you want children? Or, if you already have them, did you always know you wanted them? 70% said yes.

Wed: Have you followed into the same line of work as one of your parents? shockingly, to me at least, 90% said no.